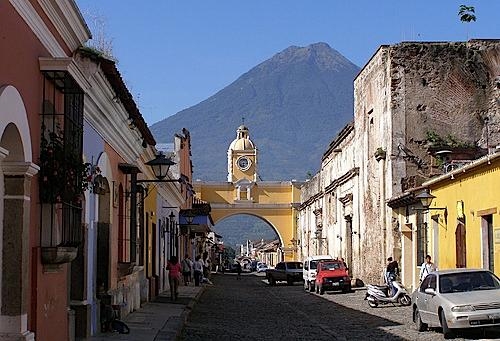 It has about 30,000 habitants and its located in the beautiful valley of Panchoy, surrounded by three majestic volcanoes. Its stone streets, the facades of the houses and churches and the weather, makes it this place unique in the world. Antigua is probably the place most visited of Guatemala. Its construction began in 1541 following the design of an Italian architect and was left in 1776, due to the destruction caused by earthquakes of Santa Marta in 1773. Next to Mexico and Lima, Antigua was considered one of the three biggest capitals of the new world; and the tourists may confirm this situation by just taking a look to the imponents constructions through out the city.

During the Holy Week , Antigua turns more interesting because it becomes the center of the religious devotion, the streets are covered by carpets of sawdust or petals of flowers that let the processions pass through, tradition that has been existing for more than 500 years.

Also, Antigua has a an active cultural life: galleries of art, museums, fine restaurants and hotels, some of them located in old colonial constructions like Casa Santo Domingo, in addition its more than 50 spanish schools of international qualification. Antigua Guatemala can be the starting point to visit another areas of the country: Tikal, Chichicastenango, the volcano of Pacaya, and many sites of interest.