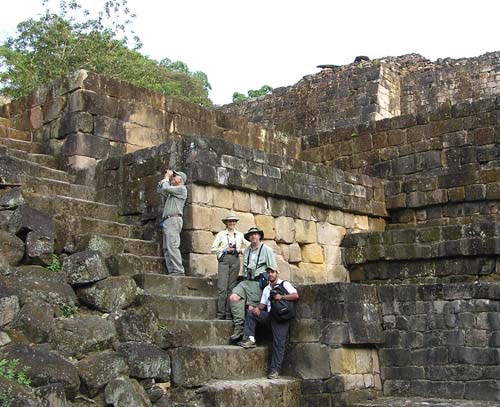 Enjoy the ancient culture of the Maya during this excursion to Quiriguá, the ruins which include the largest known quarried stone in the Maya world, and which exhibit the best artistic style and technique. On your way to the site, enjoy the scenic drive through Guatemala's Caribbean coast, including driving through a banana plantation.

Quiriguá appears to have been inhabited from the second century AD, and was once the capital of a thriving state. Its ruins include 12 tall monuments carved from single blocks of stone called stele, enormous carved stones of mythological animal shapes called zoomorphs, carved calendars, temples, a palace, a ball court and a plaza.

To date, Quiriguá is the only place where zoomorphs have been discovered.
The largest of the stele is an impressive 35 feet tall and weighs about 65 tons. The hieroglyphics sculpted upon the stelae recount the history between this city and the ancient city of Copan in Honduras.

These vertical monuments are incredibly intricate and apparently served as symbols of Mayan rulers and priests. They also provide the only remaining chronicles of this advanced civilization which so mysteriously disappeared. Incredibly, they were carved using only stone chisels and wooden mallets.

It is a testament to the hardness of the rock and the mildness of the climate that they have lasted for over 1,500 years. After thoroughly exploring the ancient mysteries of Quiriguá, reboard the motorcoach for the scenic ride back to the ship.